No replies to this topic


Hillsborough Family Support Group's long wait edges towards conclusion
Bishop James Jones, chairman of the independent panel investigating the Hillsborough tragedy 22 years ago, believes the full truth of the disaster will be revealed 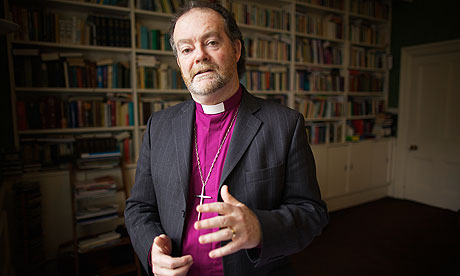 James Jones, the bishop of Liverpool and chair of the independent panel which is expected to report before the end of the year. Photograph: Christopher Thomond for the GuardianJames Jones, the bishop of Liverpool, sits in a hangdog, wood-panelled room at the House of Lords and speaks with characteristic clarity about his job chairing the independent panel examining the documents relating to the Hillsborough disaster. More than a year into his appointment to what he calls "probably my most important work as the bishop of Liverpool", now approaching the 22nd anniversary of the day, 15 April 1989, that 96 Liverpool supporters did not return from an FA Cup semi-final, he is intent on stating three main points.

The first, which he leans forward to make immediately, is that the panel, established by the Labour government in 2009 after 40,000 people at the 20th anniversary memorial service called for "justice", is being fully supported by the Conservative-Liberal Democrat coalition. "This government has wholeheartedly embraced the commitment of the previous government," Jones says. He wants it on the record that the panel's work, to collate, publish, and make sense of the disaster's whole paper trail, will continue to its conclusion. Its budget has been maintained and its staff, including the senior civil servant Ken Sutton, retained.

The second is to emphasise that the panel is committed to revealing "the full truth" about the disaster and its aftermath. They are dealing with some 60 agencies who hold documents, including Sheffield Wednesday football club, with the most important archive currently being "yielded up" by South Yorkshire police, whose negligence was the prime cause of the disaster. "That is our absolute priority," Jones says. "Legally and emotionally, those are our terms of reference, to add to the public understanding of the Hillsborough disaster. We are wedded to the terms of reference."

His third main theme is to confirm that the documents so far released already add to public understanding; they are new and revelatory. "There is significant material that sheds light and adds to public understanding of the disaster, its aftermath and the way it was investigated," he affirms. "Without doubt. There is material which we will put into the public domain which has not been seen before."

What that significant material is, he will not say, abiding by a commitment the panel has given to the families of those who died, that the detail will not be selectively released before the ultimate report is written. "We have already had panel members say they have found significant material, but we have to be disciplined for the greater good," he says firmly. "We are having to be this disciplined with the families, not feeding the material back. They are trusting us – this phrase is used: they feel this is their last chance of getting the job done properly. It is an awesome thing to stand in front of families who have lost 96 of their loved ones tragically, and for them to say: 'We trust you.'"

The families' abiding outrage, tormenting them in their grief – that all of what happened at Hillsborough was never exposed, the perception that South Yorkshire police covered up their culpability by changing officers' statements – finally burst fully into public consciousness in 2009, 20 years on. The Hillsborough Family Support Group had fought tirelessly to expose their main accusations of injustice: that after Lord Justice Taylor judged in his official report that the police, Sheffield city council and Sheffield Wednesday football club were culpable, nobody in authority was subsequently held accountable. The Sheffield coroner, Stefan Popper, conducting the inquest which produced a verdict of accidental death, limited its scope to 3:15pm on the day of the disaster, thereby excluding from inquiry the chaos of the police operation and failure to implement an emergency plan to save more lives.

Meredydd Hughes, South Yorkshire police's current chief constable, had already in April 2009 made a commitment, in an interview with the Guardian, to release his force's whole archive. Andy Burnham and Maria Eagle, then Labour ministers, had resolved to call for all official documents to be published. Then, at the Anfield memorial service, Burnham's speech was drowned out by the crowd's call for justice, which gave him and Eagle more persuasive force when arguing for the process to senior Labour ministers.

The result is the independent panel, chaired by bishop Jones, and constituted of police and public-health experts, with its remit to order the documents in a publicly readable archive, and produce their report. Katy Jones, factual producer of Jimmy McGovern's ITV drama-documentary Hillsborough, is understood to be reading much of the police material now, and professor Phil Scraton, author of Hillsborough: the Truth, who first exposed the changing of police statements, is chiefly responsible for drafting the report, which is expected to be completed this year.

Bishop Jones, although wary of talking about specific themes which are emerging, does confirm that the panel will be seeking to shine as full a light as possible on those areas which have most concerned the families. "We meet the families on a regular basis," he says, "and the families rehearse those familiar questions. It is almost as if they hold up those questions to the light and turn them round. We are absolutely taking into account all the issues the families have raised. But the process cannot be defined by them, because as you look at them, other issues come up which we haven't anticipated. There are no holds barred."

South Yorkshire police is in the process of releasing all its archive, which adds up to 350,000 unique documents – not copies or papers held on behalf of others, according to Hughes, the chief constable. He offered to release the documents, he explains now, in his own interview with the Guardian, "In the interest of openness", without initial consultation. Only afterwards did he hold discussions with his police authority, government and colleagues.

As for the officers in charge on that dreadful day, including chief superintendent David Duckenfield, the match commander, whose conduct Taylor severely criticised, Hughes says: "The officers have said they welcome the fact that this process is happening, and this will give the fullest picture yet of what happened on the day, and its fullest context." To the accusation of a cover-up, Hughes answers: "Every statement will be available in its original form, and its changed form. I think people will be able to understand more why the statements were changed."

As for what the process will produce to address the sense of injustice which abides, Hughes says, simply: "I hope the families will be satisfied that all the documents from South Yorkshire police are out there. Beyond that, it is up to them what the process will mean. I fervently hope there will be no unanswered questions."

Margaret Aspinall, chair of the HFSG, whose 18-year-old son, James, was killed at Hillsborough, says of the process, and the liaison with bishop Jones and his panel: "We do feel a trust in them. We feel we are finally being listened to after 22 years of having to fight for everything, even for the good name of our loved ones. But because of everything that has happened before, what we have been put through, we still have to be cautious. We are, this time, cautiously optimistic."


Key questions
The Hillsborough Family Support Group, Hillsborough Justice Campaign, and Anne Williams, whose 15-year-old son Kevin died in the disaster, have campaigned for answers to several key questions which the independent panel is dedicated to answering:

• What happened after 3.15pm on the day of the disaster, and could more people have been saved? The coroner limited his inquest to the events leading up only to 3.15pm.

• What was said between Peter Wright, the South Yorkshire police chief constable, and Margaret Thatcher, then prime minister, when she visited Hillsborough the next day?

• Was there a cover-up by the police? Who removed two CCTV video tapes from the locked control room at Hillsborough on the night following the disaster?

• Has the public seen all the statements made by South Yorkshire police officers which were subsequently changed before being sent to the Taylor inquiry?

• Which officers worked in the unit that vetted those police statements, who gave the orders for them to be changed and what was the purpose of that operation?

• Why was detective superintendent Stanley Beechey, a former head of the West Midlands serious crime squad, working at a senior level in that force's investigation into the Hillsborough disaster on behalf of Taylor and the inquest, when Beechey had been placed on "non-operational duties" due to the disbandment of the serious crime squad?


0 user(s) are reading this topic